Here’s what I’ve been working on and thinking about last month.

If you’d rather hear words come through my beautiful face instead of reading, watch this video recap instead: 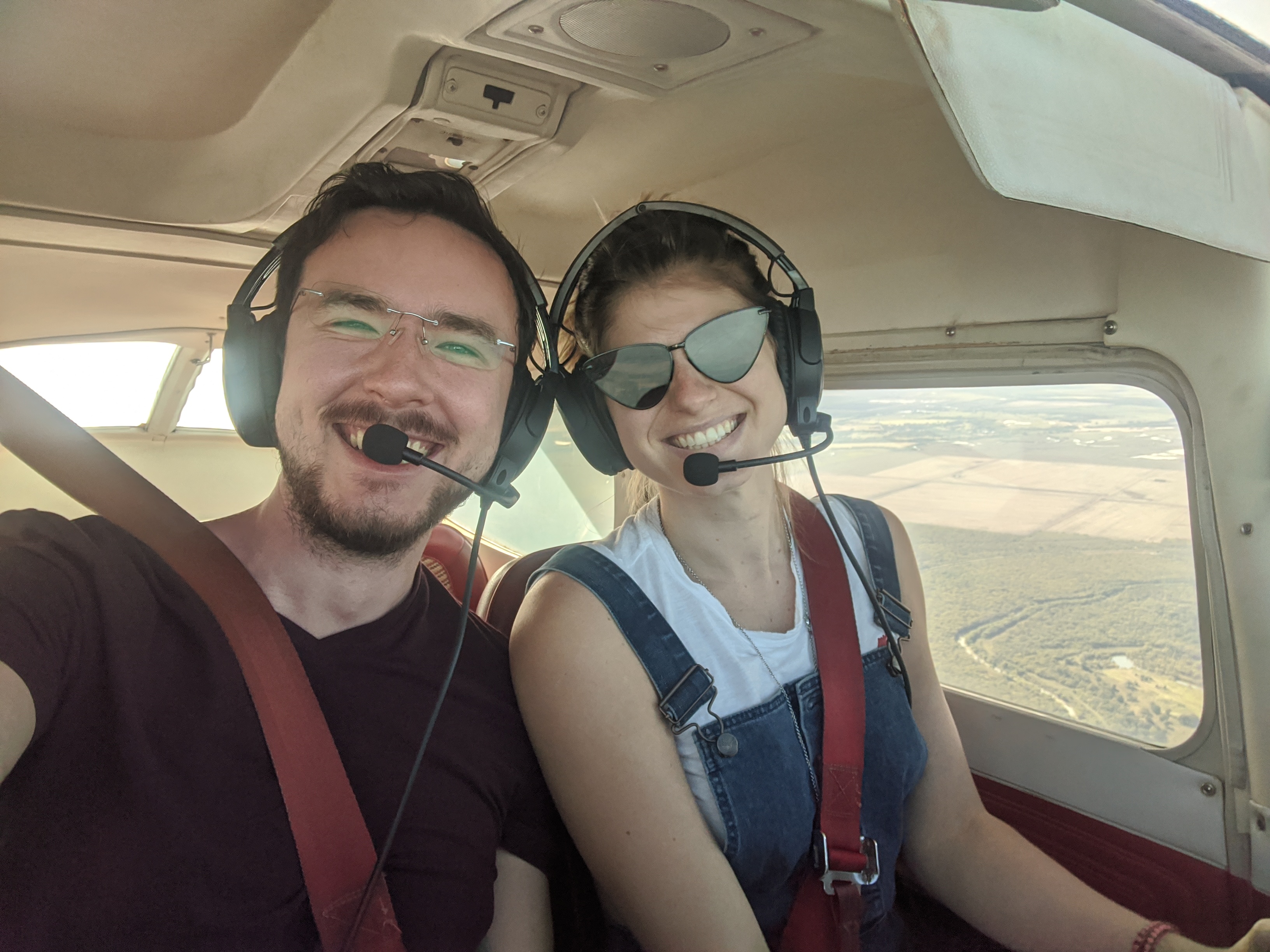 I learned how to ride a motorcycle! It was surprisingly easy to pick up after learning how to drive stick

I was delightfully surprised that paddleboarding is actually fun. It looked like a less-fun version of surfing, but it’s more like a version of Kayaking where you can change positions if you get tired

I survived another trip to Ray’s MTB indoor mountain biking part in Cleveland, Ohio without becoming quadrapelegic. What a wonderland.

I GOT TO FLY A TINY CESSNA PLANE AND IT WAS AMAZING!!! Thank you Raphy for making this happen, and also Brennan, Cohagen, and Susan for pointers on how to get started getting a private pilot’s license.

I think this is definitely a thing I want to do, and I’m not sure when it’s going to make sense to do it. The consensus I’m hearing is that flying your own plane makes zero financial sense, and it’s harder for me to justify things purely hedonistically. Paramotoring will likely come first.

The illusion I was working on with Trigg Watson is finally done! There are so many amazing and outrageous technical elements of this that I can’t talk about but oh boy it sure is cool. Trigg is starting to do virtual shows open to the public; if you’d like to see what this is about, join Trigg’s mailing list and you’ll get an email the next time he’s doing a show.

Inspired by Michele Hansen’s twiter thread about wanting a global way to unambiguously describe a given hour, I made beats.wiki as a first step to transition over to using Swatch Internet Time.

I hate time zones and daylight savings time and think this is a much better system than what we’ve got right now. There are several valid arguments against doing something like this and I think the tradeoffs are worth it.

In the spirit of The Magic Art of Tidying Up, I go through purges of all of my things about once every six months. It’s still surprising to me how quickly and easy it is to accumulate too many things. 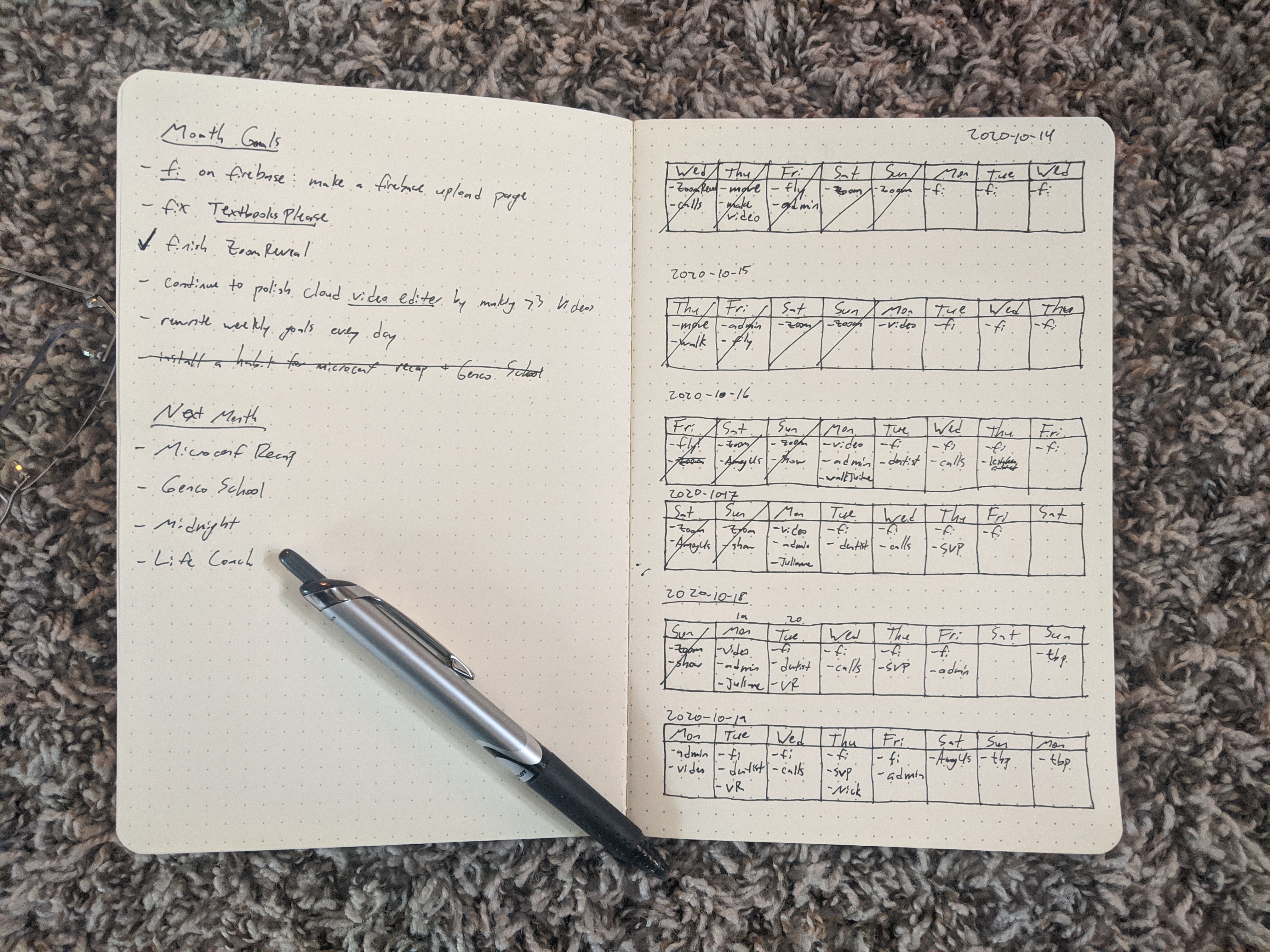 I’ve started rewriting my primary daily focus for the next 8 days every morning, referencing my monthly goals. I’ve found it much easier to focus on one thing every day when I know the plan for the week and the month, and it’s cool to see how my plan for a particular day will change over time. It’s also much easier to set my focus for today when I have my opinion about what I’d wanted to do that day for the past week. 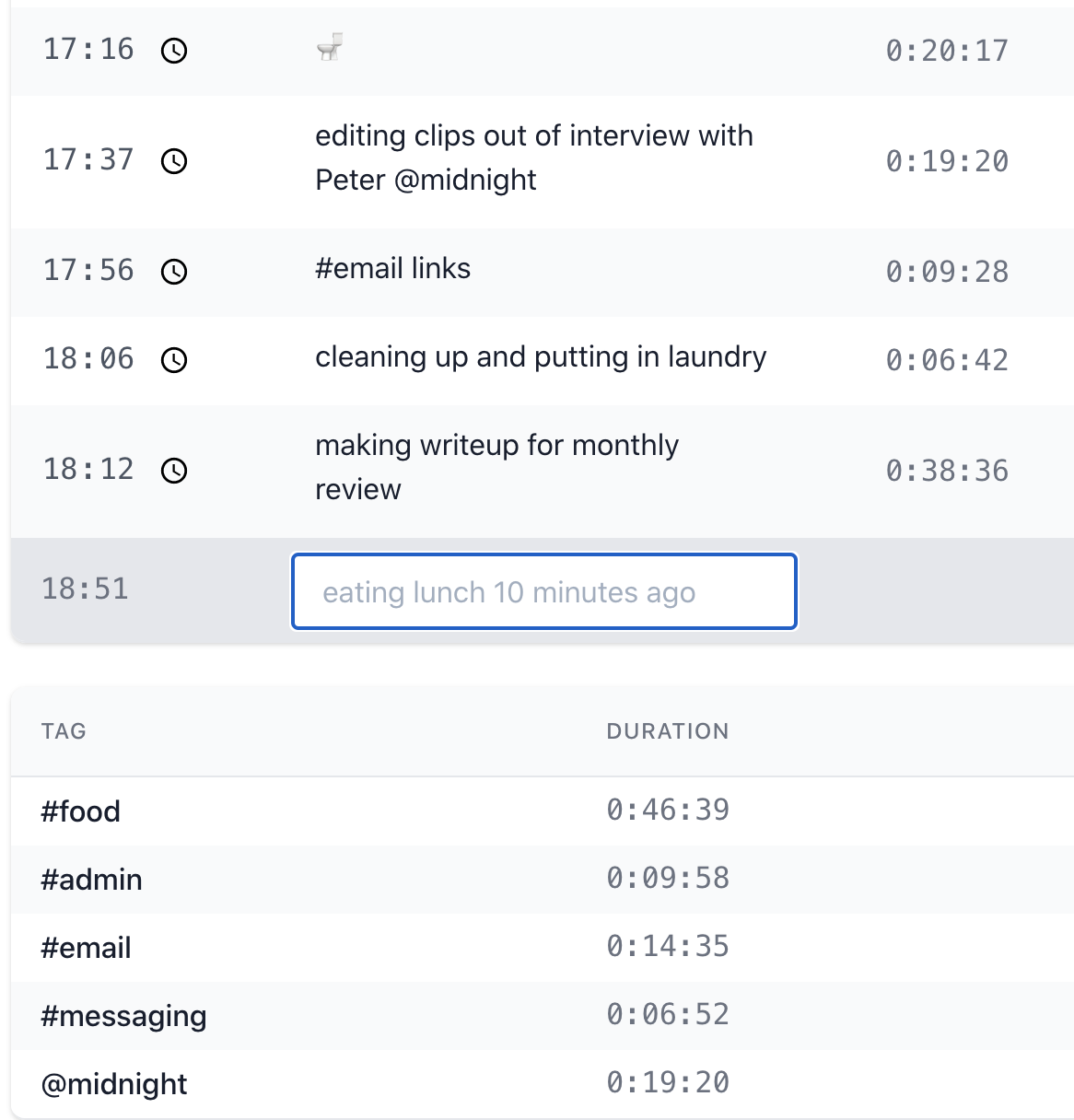 My time tracking experiment (inspired by 168 hours) is going exceptionally well. If you’re interested in playing with an experimental time tracker, schedule a call with me and I’ll give you early access!

I set up system-wide keyboard shortcuts with hammerspoon to bring up my Things todo list, my Vimcal calendar, my time tracker, and my Zettelkasten-style note taking system in Sublime—my most-used apps outside of a web browser and terminal—and I feel like I can use my computer so much faster now.

There was a super long article on sleep that was linked on Hacker News that detailed methods to be getting the best sleep. Skimming through it, it seemed like the only thing in this article that I’m not doing is napping.

Humans are probably naturally biphasic (sleeping in two chunks every day) and have a dip in wakefulness around 7 hours after waking up, so I’ve started setting a reminder for myself to try taking a nap at the ideal time. So far I’ve noticed a 2-hour nap lets me shave off about three hours of night time sleep, and I think I could make that more efficient by reducing sleep onset latency when I start the nap.

I think this would be a great way to have productive mornings without sacrificing fun social events in the evenings. I’ve also noticed that my mood, wakefulness, and ability to think are drastically improved after the nap compared to before. I’m still working out how to make time for this every day, since skipping a nap I’d planned for seems to go poorly.

Also hey, friendly reminder: if you’re sleeping poorly, the best possible way you could improve your life right now is improving your sleep. Sleep is the biggest force multiplier of any single skill I’ve come across for anything you do.

Grocery deliveries are the best thing ever. Grocery stores are fun for browsing and trying new things, but I’ve settled into the habit of just getting my groceries delivered from Whole Foods through Amazon and it’s objectively such a better experience. The time I spend on getting groceries is a third of what I was spending before in exchange for a $7 delivery fee.

I’m back in Dallas!

After spending the summer in Cleveland Ohio, I’m back in Dallas! The plurality of my friends and family are here, so it’ll be fun for the next few months reconnecting.

I loved not spending the summer in Texas—summers here can be brutal, and long term AirBnB rentals worked incredibly well. I got to live within walking distance of a beach for four months!

I’m not sure what my long term housing strategy is going to be. Do I buy a house in Dallas and rent it out over the summer? Do I buy land in a few different spots and drive around a tiny home? Do I get several rental properties for passive income and bounce between them?

Until I settle down in my next relationship and start building a family I think this semi-nomadic thing makes the most sense to try out different geographies. Denver and California are coming up next, likely in January!

I got recommend Big Friendship twice in the same week. It’s a book about how friendship is the most important and most neglected type of relationship in most people’s lives, and how to take friendship more seriously. If you’re not investing in friendships, what are you going to do after a breakup? Who’s going to help you through the death of a spouse? If you’re only going to turn to friendships when you need them, you’ll be disappointed when you realize there’s no support there. You get out of (healthy) relationships what you invest in them.

From my dating research, and my proclivity to become socially isolated when I’m in long term relationships, focusing on building friendships seems like the best place to spend energy.

Some other tidbits from the book:

Among Us game nights

In the spirit of focusing on friendship instead of dating, I’ve been hosting weekly game nights for the social deception game Among Us.

They’ve been a blast! Among us is particularly engaging because of the social deception you need to win, especially when compared to something more algorithmic like chess.

Here’s a quick intro on how to play if you’re interested in joining! I’ll be hosting a game most Saturdays next month at 6pm CDT.

Robert Kiyosaki, the author of Rich Dad Poor Dad, has an amazing board game called Cashflow that the owner of my AirBnB in Dallas has taught to over 1,000 people.

The game lets you experiment with different strategies of navigating life financially. Unlike Monopoly or Life, though, Cashflow is designed to teach you how investing (particularly real estate investing) can get you generating enough passive income to become financially independent as quickly as possible.

Goals for next month