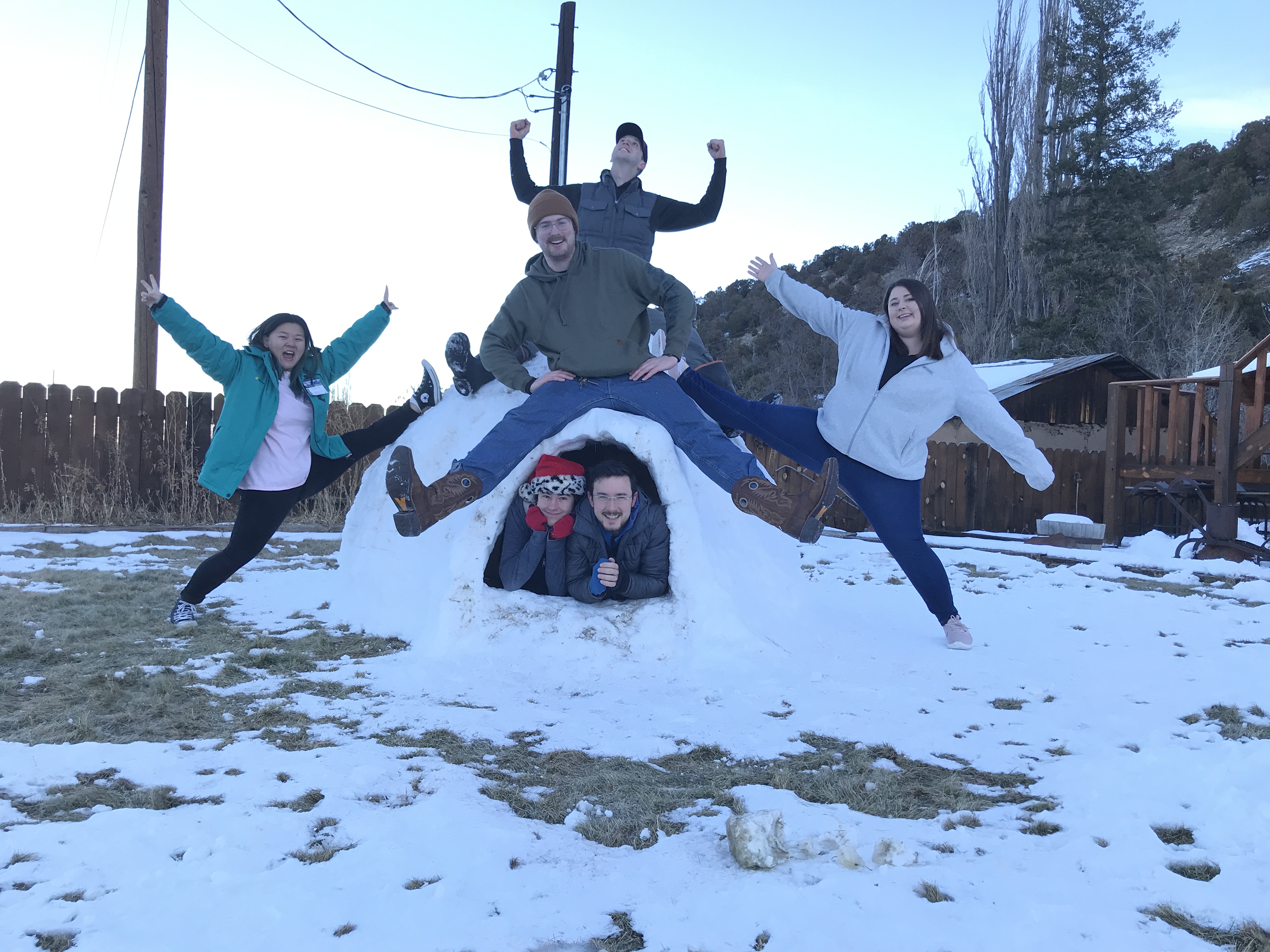 Hi! Here's my life update for the past two months.

If you're more of a watcher than a reader, here's my video update instead:

This blurb grew big enough that I split it up into its own blog post about continuous blood glucose monitoring. tl;dr: my normal ketogenic diet keeps my glucose smooth and steady (except at night when I get hypoglycemic but I think that's okay), and carbs from white rice are especially bad for me now.

This blurb grew big enough that I split it up into its own blog post about how to get enough vitamin D. tl;dr: I'm vitamin D deficient and I'm not yet sure how to properly correct that, but I'm now trying supplements and using a UVB lamp made for lizards in addition to spending time as naked as possible outside.

This blurb grew big enough that I split it up into its own blog post about if high LDL on the ketogenic diet is bad. tl;dr: LDL goes way up if you're eating a low carb/low sugar/high fat diet and that's probably fine.

For Christmas last year I had great success getting everyone the same fantastic sleep mask, so I repeated that strategy this year by getting everyone an Awair air quality monitor that measures temperature, humidity, carbon dioxide (CO2), volatile organic compounds (VOCs), and PM2.5 dust and alerts you if any of these get out of range. This is the air quality monitor that DHH recommended to me.

The friends and family I gave these air quality monitors to are super engaged with them and compete to get higher scores. Similar to the masks I gave out last year, this feels like another gift that can meaningfully improve someone's life with minimal effort on their part.

Also a quick PSA on air quality: if you live in the northern hemisphere, you probably have your heat turned on right now. If your heat is on, your air is probably super dry. Dry air is really easy to correct: get a humidifier.

If you don't have one, my favorite right now is the LEVOIT: it fills from the top so you can refill it from a bottle while it's running, it's super easy to clean, doesn't have any stupid extra features, and looks sorta like Apple made it.

If you don't have $40 lying around to spend on better air quality, you can build one with a large bowl, a towel, and a fan.

What's nice about a personal trainer is that it's a way to outsource the thinking of taking care of my body. I can just do what this external thing is telling me to do and he'll track my progress and adjust accordingly.

You know what else can do that? Robots.

Robots also only charge pennies of electricity to run and can be tucked away wherever they would be most convenient.

With this philosophy in mind I built a prototype pull-up counter:

Ideally this little guy would track the pull-ups I'm doing and show me a graph of the number of pull-ups I do per day. I could get direct instruction for what I need to do next (more pull-ups) and feedback on how I'm doing ("here's how many pull-ups you did"). It's not quite a robot personal trainer but I like this sort of solution much better.

Sadly this prototype isn't very effective. I tried two different types of proximity sensors and neither worked very well. The next iteration will use either a broken laser sensor or just a button I hit to count up manually how many pull-ups I did (which sounds so manually pedestrian ugh).

I read Gifts of Imperfection on the recommendation of a woman I'm dating who is fascinated by psychology and deeply values the positive impact that psychology and relationship books have had in her life. This book hit me hard with it's message of love, acceptance, and embracing vulnerability. I'm working on a full summary.

On a ski trip I took with my siblings we took a day off to build an igloo. It was about 20 hours of cold, wet, hard work, and it was the most fun I've had in a long time.

I was struggling while skiing to stay present on the actual skiing, which is kinda nuts: I traveled for twelve hours, paid for an AirBnB, rented skis, and paid for a lift ticket so hundreds of people could all enable me to have fun, and I got more enjoyment out of building a thing out of snow outside for free.

This crystallized for me that the most consistently enjoyable and fulfilling way for me to be spending my time is working on meaningful projects.

After being peer pressured by my makers.dev co-host, I decided to splurge on an $800 microphone setup: Shure SM7B with a cloud lifter to bump up the gain 25dB, and a Scarlett 2i2 3rd Gen audio interface. It's the same microphone Joe Rogan uses, it's barely different than my old microphone, and I love it.

My first method was using an external computer to take my camera and screen as HDMI inputs and mix them in OBS when I hit a button to go back and forth. I hated that I needed two computers to do this, and that I needed to remember to manually switch between the angles (and check a second screen to make sure I actually switched), and that if I got it wrong it was too bad because the raw inputs weren't recorded.

My second attempt was to automate my manual editing by making a web-based video editor that rendered videos frame-by-frame, then exported screenshots of each frame to a folder with headless chrome, then stitched the video back together with audio. This method was ridiculous and slow but was cool to learn how video works.

My third attempt was to detect motion in the video of my screen and switch to the angle of just my face if the screen wasn't moving. This actually worked pretty well, but still needed manual (or automatic clap-based) syncing of the two videos.

The day after I had a working prototype for this, I got the idea for my perfect talking head setup: a native macOS app that overlayed my camera on the screen, similar to Loom, but that would let me easily switch between the two angles.

A few days of learning native macOS app development later and I've got a setup that I'm really happy with.

Here's an example short video I made with my new app, CamHead:

I've been wanting my own Google Voice clone for the better part of the last seven years. I'm working on a genealogy project interviewing my older relatives and was looking for an easy way to record calls. A few hours of development later and I've got an app that has all the features of Google Voice with some extra note-taking and call recording baked in.

I'm not quite sure what to do with this. Chris thinks it would be great to throw up on an app store like Shopify or Salesforce, which is a great idea that I'll probably wait like a year to do.

I'm helping my brother-in-law and sister start businesses in mobile mechanics and tutoring respectively. I've noticed that they're facing a set of very similar challenges: they both need websites with a contact form and a way to manage information about clients. I think the Broccoli Phone I built might be perfect for each of them.

It's neat thinking about types of businesses very different from the ones I'm usually focused on. Door hangers, for example, would—I think—be incredibly effective for a mobile mechanic, and are unheard of in the software space.

I had a very fun podcast interview this month

and this tweet on why no-code doesn't exist did super well:

My podcast with Chris Achard, Makers.dev, is continuing to pump out episodes about once a week. Recording this podcast is consistently a highlight of my week. This podcast is a great way for me to keep track of what I'm working on and highlight big and small wins.

As an added bonus, there are people listening to it and enjoying it!

My solution for most things is to make an app or a podcast, so I messaged a few friends and recorded some early audio-only episodes.

I was disappointed to see each hour long episode only get about three downloads (apparently most people don't listen to podcasts), so I started looking for ways to make this content more digestible by putting it in the Facebook page for this alumni group. I tried wavve but it was just terrible: it took way too long to make each clip.

Also, the audiograms weren't as engaging as I wanted them to be. I tried a few experiments of making more engaging visualizations from the audio, like an automatically animated cartoon head, but I realized short clips of video would be way more engaging than that.

With the work-flow I've built to automatically edit Makers.dev I was able to start churning out video episodes of PSLove pretty easily. With clips.marketing I have a way to really easily bookmark and clip episodes into shorter more engaging clips and syndicate them on YouTube, Facebook, Instagram, and the audio-only podcast.

Inspired by Gary Vaynerchuk's How to Make 64 Pieces of Content in a Day, Joe Rogan's JRE Clips channel, and the ease of media consumption on Facebook when compared to a podcast or blog, I've been putting a lot of work into a tool to make it trivially easy to clip long form video and queue it up into social media feeds.

Here's an example clipped video this process spits out:

That clip is one of six that I made from an hour long interview. It took about ten minutes to message back and forth to set up the interview, 60 to record it, 5 to edit it with my fancy ffmpeg robot editor, and then about 45 to timestamp and clip it.

There was some extra marginal time I spent fixing and smoothing out broken systems, but let's ignore that for now and say that I made six pieces of content in 10 + 60 + 5 + 45 = 120 minutes soup to nuts. With the developments I'm working on for clips.marketing I could also have these clips queued up on any number of social media feeds with zero extra human time.

This thing I've built feels very valuable and I'm not sure what to do with it. Should I sell it as a SaaS? Should I start my own media agency? Should I keep this as my secret sauce and start a bunch more podcasts? I'd love your perspective, and would especially love to know if you or someone you love is suffering from sitting on a huge long form media vault but isn't posting daily clips on social media networks.